Most of Denmark is accessible by public transport. All major cities are connected to the DSB and Arriva rail networks and buses are available almost everywhere. The cost of using public transport is steep but it is possible to obtain cheaper tickets, at which point it becomes a very affordable alternative to owning a car. 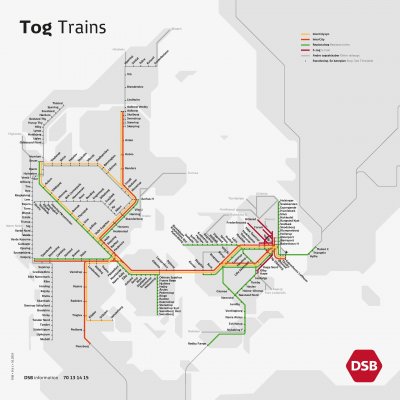 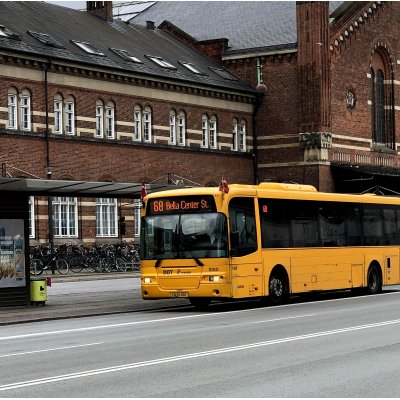 DSB is the national operator of trains in Denmark, operating express services—InterCityLyn and InterCity—between the capital—Copenhagen—, Odense, Aarhus and Aalborg. Additionally, DSB operates the major services connecting most of the country.

On DSB trains you are free to travel without a seat reservation in most cases (this has been suspended during coronavirus); however, this way you may have to stand. A seat reservation can be bought for 30kr at machines in the station or in the DSB app.

Arriva, a subsidiary of Deutsche Bahn, operates a few regional trains in Jutland. There are a few other train operators operating local rail with smaller regional services.

Each region in Denmark has its own transit company responsible for local transit:

Region Northern Jutland is covered by Nordjyllands Traffikselskab, which operates buses and a few local trains, namely RE75 from Skørping and Aalborg to Skagen via Frederikshavn and Hjørring and RE76 from Hirtshals to Aalborg and Skørping via Hjørring.

Region Central Jutland is covered by Midttrafik, which operates yellow city buses, yellow A city buses (highly frequent services) and blue regional buses. Midttrafik also operates a light rail with two lines: L1 from Aarhus to Grenaa and L2 from Odder to Lystrup via Aarhus. Additionally, there are two local trains in the west: 92 from Holstebro to Skjern and Lemvigbanen (93) from Vemb to Thyborøn.

Region Southern Denmark is covered by Syddtrafik in Jutland, and by FynBus on Fyn, which both operate buses.

Region Sealand and the Capital Region are covered by DOT: Din Offentlige Transport, which is a cooperation between DSB, Movia and the Metro Company. Sealand and the Capital are serviced by city buses and regional buses as well as the S-train and the Metro. The S-train is a hybrid rail network connecting Copenhagen to the surrounding towns. The trains are frequent and make commuting to Copenhagen from the rest of Sealand feasible. The Metro connects part of inner Copenhagen that are not connected by the S-train, making travel within Copenhagen faster and more convenient.

Bornholm is covered by BAT, which operates local and regional buses.

Jutland has blue X-buses, which are long-distance buses connecting cities that are not well-connected by rail. The X-buses also connect Aarhus and Billund airports to nearby towns and cities. X-buses do not cost more than regular buses, except for airport buses, which have a minor surcharge.

The official travel planner is Rejseplanen, which covers all of the aforementioned companies and routes. It is available in Danish, English and German. Rejseplanen determines the fastest or most convenient route for you and tells you the price using a Rejsekort.

Google Maps also has transport schedules for the major cities and intercity trains, however it does not account for travel disruptions or other issues. For this reason, Rejseplanen is almost always preferable. 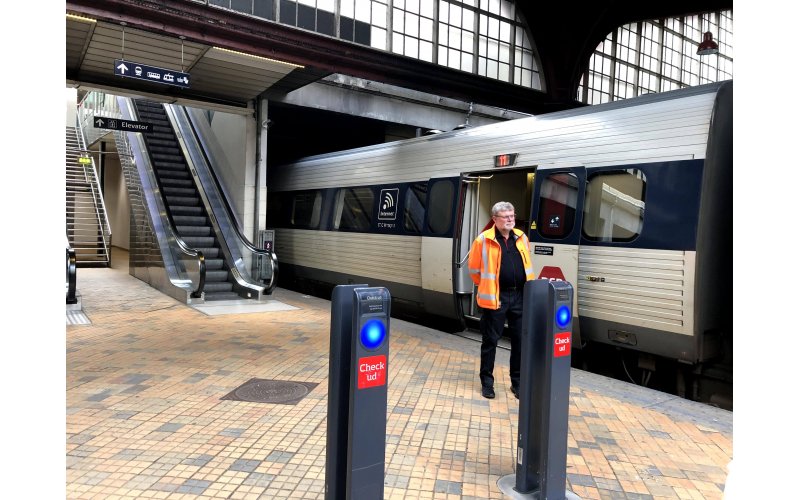 All public transport in Denmark, with the exception of a small number of local buses uses the Rejsekort, the travel card. The Rejsekort is comparable to the OV-Chipkaart in the Netherlands, the Oyster card in London, the Opal Card in NSW, Australia or the China T-Union in China. The card is a valid ticket on trains, buses, lightrail, metro etc. in most of Denmark as soon as you have added money to it. You can add money to your card in the blue machines at all train stations and larger bus stops or online at rejsekort.dk.

When you start your trip, you check in with your Rejsekort at one of the blue Rejsekort stands with a green label saying “Check ind”. At train stations and light rail, these stands are found on the platform. On buses the stand can be found by the doors inside the bus. When you finish your trip, you must check out at the blue Rejsekort stand with a red label saying “Check ud”. You only pay one fare when changing between means of transport and you are not required to check out when doing so; however you do have to check in whenever you change.

When checking in, you pay a deposit on the card. When you end you trip, the deposit is refunded and the actual cost of your trip is charged.

What makes the Rejsekort stand out from most other types of ticketing is the frequency discount. The more you travel within the two fare regions (West: Jutland + Fyn, East: Sealand), the less you pay. For instance, a 2 zone trip within the inner city in Aarhus on an adult Rejsekort costs 18kr the first time. Once you have used your card 10 times, the price drops to 16.20kr, after which it continues dropping.

There are several different types of Rejsekort: Personal, Flex, Anonymous and Business. Only residents are eligible for the personal or flex cards. The anonymous card can be obtained by anyone, but unlike the other card types cannot be ordered online. The anonymous Rejsekort can be bought at any train or bus station.

Personal cards are available for adults, young people, children and pensioners. The only difference between these categories is how much using the card costs. Personal cards may only be used by the person to whom it is issued. Buying a new personal card costs 50kr.

Flex cards cost more to use than the personal card, however it may shared within a household, with guests, friends etc. Note however, that it is still attached to someone's name. Buying a new flex card costs 50kr.

Anonymous cards are not attached to anyone's name; however, it required a large amount of money on it to be able to check in, as the deposit is higher. Anonymous cards obtain meaningfully less frequency discount. Buying a new anonymous card costs 80kr.

Business cards can be issued to companies for use by their employees with certain benefits attached.

Additionally, Rejsekort has the Pendlerkort (commuter card), which lets you travel freely within a set amount of zones for 30+ days. These cards are expensive but may be cheaper than a basic rejsekort if you are commuting many times per week on the same route.

If you are between the ages of 16 and 19, in high school or higher education; you are eligible for the Ungdomskort (youth card). This card lets you travel freely within a larger area surrounding your home and school. It costs 20.60kr/day—unless you are in high school, in which case it costs 13.00kr/day. Read more on ungdomskort.dk.

On DSB's website, you can buy Orange tickets, which are printable discount tickets valid only for a specific train. They can be much cheaper than travelling on a normal ticket; however they must be bought well in advance. The tickets become available up to two months before departure. Orange tickets are non-refundable; however, the new DSB Orange-Fri ticket is refundable, but almost always costs more than the regular Orange ticket.

An Orange Ticket from Copenhagen to Aarhus can cost as little as 99kr.

On Arriva's website, you can buy OneDay tickets, which let you travel freely on all Arriva trains in Denmark for the entire day.

Most local transit companies offer their own ticket types as well. Some of these are valid for the entire day, for specific zones or when commuting. In some cases, these may be cheaper than using the Rejsekort.